Located in the heart of Kuta on the main shopping road, Legian Street, MAMA'S® has continued its operation since 1985.

The owner, or better the founder Mr. Reinhold Jantzen, from the city-state of Hamburg, who arrived in Bali 1977. He started in 1983 a Meat & Fish-Processing - the products were sold in the restaurant and now the Industry is supplying most of the Catering Industries, Hotels, Restaurants and Supermarkets through out Indonesia with high quality products. These factories are the first and only which are certified with ISO 9001:2000 and Food Safe Plus Certificates, issued by the German and Australian Government Health Authorities.

You can get some information from the PT.SOEJASCH BALI WEBSITE: www.soejasch.com

Good news everyone! Mama's German Restaurant Bali has open a branch in Bandung!

Last weekend, we celebrated my brother's birthday here. We wanted to try Pork Knuckle and
Meat Loaf (Bavarian Style), but unfortunately they were already sold out. Maybe next time 😃

And I ordered Breaded Pork Cutlet "Hunter Style".  (Rp. 94.300,- ++)
It was a thin pork cutlet with mushroom sauce. It served with fries and salad. The bread crumbs' coat was very crispy and the pork was soft and tender, meanwhile the sauce complements both of them.

My brother ordered Bali Pork Chop (250 grams). (Rp. 86.200,- ++)
It unexpectedly tender and could be cut by fork. The pork chop served with fries and sauted vegetables. Must try! 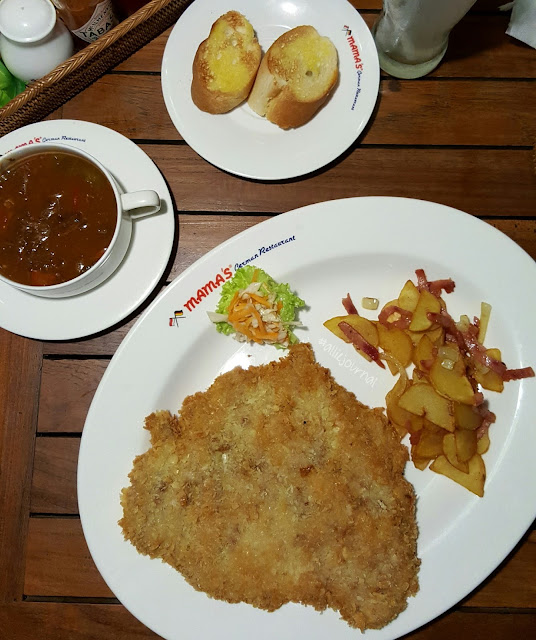 Different from my cutlet ( Breaded Pork Cutlet "Hunter Style"), this cutlet's coat didn't use bread crumbs but still crispy and didn't serve with any sauce. It served with Pan Fried Potatoes and salad. You must try this Pan Fried Potatoes!

I am satisfied with their food! Next time, i will try their Pork Knuckle (1000 grams), Meat Loaf (Bavarian Style), and Giantess Curry Sausages (180 grams).